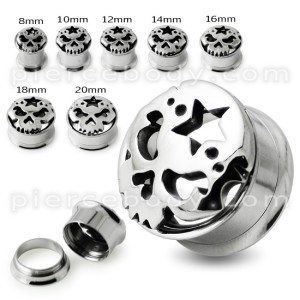 So you want to surprise everybody on Halloween’s Day? Well, prepare to have a skull flesh tunnel on your ears. Which accessory could actually make you feel like a part of the Halloween party? The skull on your flesh tunnel makes you look weird, daring and of course typically Halloween. You might notice your friends and relatives thinking hard on what to wear and how to makeup on the Halloween Day. But you are sorted with the skull shaped ear flesh tunnel on the big day. So meet up with your piercer and get a fresh appointment if you really wish to scare the lights of your friends and relatives.

Piercebody in keeping with the Halloween trend has stored amazing body jewelry pieces that coincide with the Halloween theme. You will get a wide range of skull and skeleton body jewelry for every part of your body. However, the skull flesh tunnel seems to be the weirdest and perfect choice for the big day. Made from 316l surgical steel it has internal screw and comes in various sizes which include 8-20mm having a size for a wide range of ear gauges. You have to start preparing for the look and therefore you must start off with gauging immediately after you buy the product. The sooner the better!

Skeletons and skulls are the most popular motifs during the Halloween. They are believed to symbolize death and mortality and coincide with the Halloween theme. However, in certain ancient societies skulls represent life and embody consciousness. Whatever is your belief, a skull or a skeleton cannot go wrong on Halloween’s Day. Skulls are in any case quite popular among youngsters, among people of a particular belief, sect, band and so on. Skulls have been popular since ages and more and more people have come to love it.

Skull is fashionable now. The late Alexander McQueen is credited with popularizing the skull in a stylized manner on bags and scarves. It gradually caught up as a viable motif and began to spread on other accessories including body jewelry. Currently, there are several variations of the skull design which are used in jewelry items for people who love to carry a bold look. This particular skull flesh tunnel with a star created on the top looks scary and hence creates an instant impact on the onlooker. It also looks cool to those who love bold fashion.