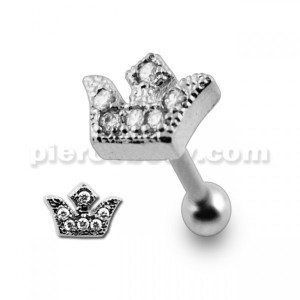 Celebrities are often attributed to set off new fashion trends and Hollywood celebs are clearly have a profound influence on how and what their fans wear and when. So, now tragus piercing is a rage and lots of big names are sporting tragus piercings which have left their fans wanting for more. Tragus piercings were not heard off so much even a couple of years back but now they are quite popular. Some of the hottest celebs in the tinsel town are sporting tragus piercings because they look extremely fashionable and chic. Each of them is sporting their individual style and you can easily follow whoever you want to.
Robyn Rihanna Fenty or more popularly known as simply Rihanna sports a wonderful glittering tragus earring jewelry to suit her style and personality. The fact that she is also a fashion designer contributes considerably to choosing such a rare piercing. Rihanna is considered to be the style icon of this era. She chose a tiny stud for her tragus in which she looks bold, smart, fashionable and beautiful. Scarlett Johansson is another celeb who flaunts a tragus piercing. She has been sporting it since 2005 while changing the jewelry many a times over the years. Initially she sported a captive bead ring which was later replaced by a diamond stud earring on her tragus. Needless to say, she looks breathtakingly gorgeous with that.
Candice Swanepoel, the famous model from South Africa also sports a sexy and gorgeous tragus piercing along with an incredibly sensuous body. With her rags-riches story and her edgy fashion she has become one of the most successful models for lingerie brands. American singer cum actress Lucy Hale sports a beautiful tragus piercing on her left ear which adds to her petite personality. Pink, Leona Lewis and Shannon Elizabeth all have their tragus pierced with lovely little pieces.
So, if you too wish to look like your favorite celebrity, buy the micro setting jeweled crown tragus piercing offered by Piercebody. Made from surgical steel, this amazing tragus piercing is shaped in the form of a crown and has micro set jewels sparkling and twinkling all the way. Let the crown grace your tragus- left or right and feel and see the difference in your personality. This is a particularly stylish piercing which has the capacity to transform your personality without really looking too flashy. Rock your look with the tragus crown!