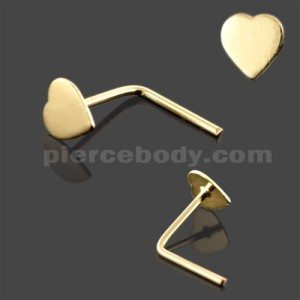 Fashion changes with time so foes jewelry! The staid and simple look of the 70s gave way to the craziness of punk culture where offbeat became the norm. Nose jewelry from simple stone studs to huge rings began to be seen here, there, and everywhere. Yet no sensible guy or girl would have liked to be seen sporting a pierced nose with a jewelry inserted through it. Thankfully, this disdain did not last too long. The 90s came with its foolproof ideas of embracing the variety of life. Nose studs and l shaped nose rings turned mainstream in the last decade of the century. A number of jewelry houses started designing the nose jewelry for piercing and hip and happening stars like Dionne was seen lighting up the screen with nose jewelry in ‘Clueless.’
The fad stayed for a while and then faded slowly and surely with the turn of the century. But remember the age old adage of history repeats itself? The style of nose studs are back in reckoning once again and even the exotic culture of the East have started gaining in prominence now.
Well, that certainly doesn’t mean that you have to go overboard and load your cute nose with stones and precious metals that will hide your piercing well and truly. Try to keep the look simplistic on the contrary. A plain gold bar sporting a bewitching shape of a heart at one end is just right to draw attention. It does adorn you without making your effort too obvious and that is just right in today’s world.
It might help you to remember that a simple stud in solid gold will go a long way in enhancing your reputation. This tiny ornament will also serve as your mark taking your style quotient several notches higher as well. The very thought of wearing gold jewelry fills you with joy but do spare a thought for your pocket here. Surely, you cannot afford to have your savings wiped out for a nose stud? Yet you are reluctant to let go of the idea. It appeals to your sense of aesthetics as well as your dressing style.
Fret not, there’s an easy way out! Opt for the 9K gold l shaped heart nose stud variety of gold and keep it affordable. The lovely gold bar with its quaint L shape, replete with a beautiful heart at one end may look priceless, yet it will be yours for only $ 1.99. You have to buy a minimum of 3 pieces to avail of this never before offered whole sale rate though.